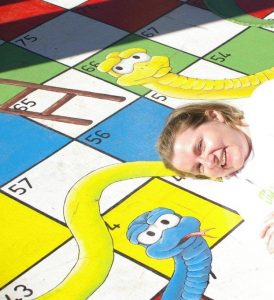 MOST people run if they see a snake slithering their way but Cherie Curtis stopped for a chat when she was greeted by two bright serpents at Mundubbera today.

The snakes, Mr Yellow and Mr Blue, are part of a huge Snake and Ladder mural painted on the cement at Mundubbera, 372 kilometres north-west of Brisbane.

The ladders in the mural, however, refused to comment. “It appears they help writers climb to the top of their game, but they’re not always as straight with children as they should be,” Mr Yellow said.

“…I wrote about a dingo pup stealing my chocolate…”

While at Mundubbera, Mrs Curtis also visited the town’s lovely Library and Art Gallery. “I loved the Island exhibition – Rachel Koster is brilliant,” Mrs Curtis said. “There was an interactive display where visitors could write about their own island experiences so I wrote about a dingo pup stealing my chocolate bar when I visited Fraser Island – that’s a true story.”

Q: How do snake families say good-night?
A: With hugs and hisses.

Q: Why did Cinderella Ladder dislike her mother?
A: Because her mother was a step-ladder!

Q: Why did the dragon take a ladder to the bar?
A: Because he heard that drinks were on the house!

Q: Why did the thief bring back a stolen ladder?
A: Because police had threatened him that further steps would be taken if he didn’t.

Q: What do you get if you cross a snake with building blocks?
A: A boa constructor!

2 thoughts on “Playing Snakes and Ladders at Mundubbera”